Today is a good day to reflect on how important our freedom is, and why we should never take it for granted. Today is ALSO a good day to celebrate democracy in general, which thanks to Themistocles and the Ancient Greeks, was saved in its infancy during the 2nd Persian War. 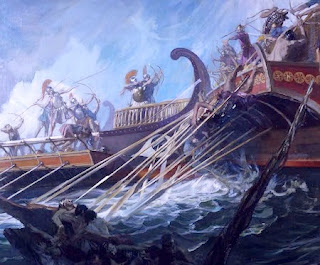 The specific incident I'm talking about is of course the battle that took place in the strait between the small island of Salamis and the Attic peninsula in September 480 BCE. It is in this narrow, windy straight that a small Greek fleet managed to defeat the much larger Persian navy. Herodotus credits the Athenian general Themistocles with cleverly orchestrating this showdown, first by tricking the Persian king Xerxes into battle, then luring the Persian fleet into the strait, where forceful winds would cause the enemy triremes to collide and thus allow the Greek ships to ram them as they floundered helplessly in the water. The plan was a success, and after the battle the devastated Persian fleet retreated from Greece. This marked a major turning point in the war, and the next year the Persians would be defeated for good at the battles of Plataea and Mycale. Athens' fragile democracy (which had been founded less than twenty years before) was saved.

So let's drink a toast to our Republic (for that is what America actually is), and to Democracy (which is the foundation of all our freedoms)!

Posted by Meghan at 4:33 PM No comments: