Last week I told you how I stumbled upon a gem of a book I found at a used bookstore. This week I went back to said bookstore and found yet ANOTHER gem. This one is called Voyages in Classical Mythology, and I snatched it up for only $15. 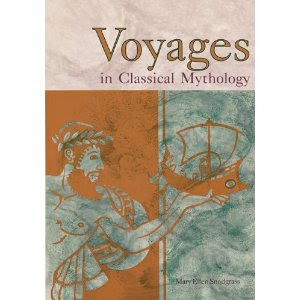 Voyages in Classical Mythology is an encyclopedia that chronicles the voyages and adventures of 44 heroes and deities from Greek and Roman mythology. Besides recounting the tales of famous heroes like Herakles and Achilles, author Mary Snodgrass also covers the travels of lesser-known characters like Nauplius and Palinurus. Although this book doesn't directly help me with my Themistocles novel, it does sometimes explain the origins of certain place names in and around Attica/Athens which I find useful. For example, history tells us that Themistocles lived in an area of Athens called Melite. As it turns out, Melite was the name of a queen of Athens whom King Aegeus divorced because she bore him no children. It's the kind of fun fact I like to slip into my stories.

Each hero's story is broken down into four parts: genealogy and background, journey, alternate versions of the story and the symbolism behind the tale. This makes reading the book much easier to digest and allows the reader to keep everything straight in their head. There are even bullet points for heroes like Herakles who not only went everywhere but did everything.

It would have been nice if the book had focused on maybe ten heroes and really done an in-depth analysis of their travels around Greece and their influence on Ancient Greek culture, but this book is really meant as a basic encyclopedia of Ancient Greek and Roman deities and heroes and to be enjoyed by anyone of any age. At only $15 and full of interesting stories fun facts, Voyages in Classical Mythology is a good book to own.
Posted by Meghan at 11:10 PM 1 comment: