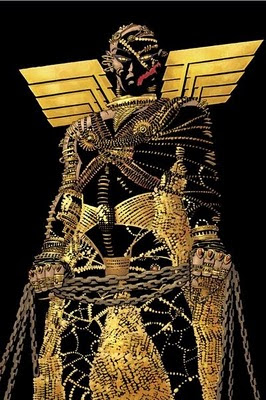 If you're a fan of 300 (the comic or the movie), you might be interested to know that Frank Miller is making another graphic novel, this time based on King Xerxes.

The new comic, which will come out in six installments starting next year, is based on the movie's fictional portrayal of Xerxes, played by Rodrigo Santaro. It will start ten years before the Battle of Thermopylae, opening with the Battle of Marathon (woot!) and following Xerxes' meteroic rise to power and his search for godhood. But what REALLY interests me is the news that one of the main characters will be none other than...THEMISTOCLES!

According to Frank Miller, Themistocles is..."[A] character who is the dead opposite of Leonidas in that Themistocles is a conniving, brilliant heroic figure. He was nicknamed the 'Subtle Serpant' and he always manages to do the exact right things that will resault in him benefiting greatly."

I'm stoked because my entire novel is told by Themistocles, who is out to prove his metis, that combination of quick thought and bold action. I feel like the more people who acknoledge his cleverness the better told his story will be.

Speaking of stories, I enjoyed both the comic book and the movie 300, and I am certainly lookning forward to this prequel. Maybe I should aim to have my book published by next year as a companion source? ;)
Posted by Meghan at 4:30 PM 2 comments: