A Short Book Report: Lords of the Sea

It's amazing how sometimes when we really need something it just suddenly appears.

A few weeks ago I was lucky enough to come across a new book on the Athenian navy. I say lucky because I've been in the process of editing my novel and needed more detail and insight into this very subject. And that is exactly what I got with John R. Hale's Lords of the Sea: The Epic Story of the Athenian Navy and the Birth of Democracy. 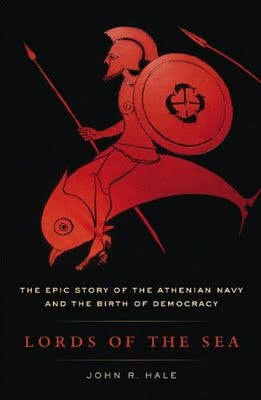 Hale breaks the book down into five sections: Freedom, Democracy, Empire, Catastrophe, and Rebirth. Part one focuses on the founding of the Athenian navy through the workings of (who else!) Themistocles. Hale goes into detail about how the navy was built (literally--there is some great detail to be found here), how naval tactics changed during the late Archaic period and thus made it possible for the Greeks to achieve victory over the Persian fleet, and how acquiring a navy laid the foundations for Athens' future empire.

The second part of the book (Democracy) explores Athens' Golden Age. It was at this time that the Athenian navy was at the peak of its power, bringing wealth, culture and knowledge from abroad into the city. There are some fun details here, but things really get interesting in the section called "Empire", which deals with both Athens' struggle to maintain control over its neighbors and its war(s) with Sparta. The conflict is not an easy thing to break down considering how LONG it lasted (over 30 years). Still, Hale manages to successfully convey how rapidly naval tactics and technology changed and how that affected the outcome of the conflict.

The last two sections deal with the Athenian navy's fall after being defeated by Sparta, it's brief comeback and eventual capitulation to Macedonia. It charts the events from 397 BCE to 324 BCE and covers everything from the Second Maritime League to the last battle at Amorgos. Hale does a good job summarizing the events without getting too convoluted but still feeding us relevant and interesting nuggets of information. Most readers will probably feel satisfied with his explanations.

In short, I really enjoyed this book and feel that it's an asset to anyone who is writing about or even interested in Hellenic history between the late Archaic age and the start of Alexander's great empire. It's well-paced, well-written and well-researched. And well...I like that!
Posted by Meghan at 8:59 PM 10 comments: