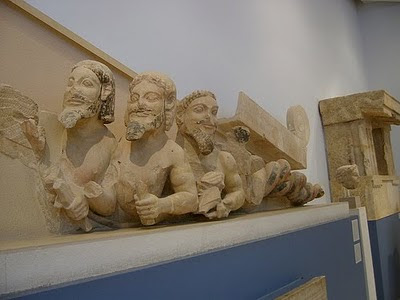 The Bluebeards of Bluebeard Temple.


When most people think of the Athenian Acropolis, they think of the Parthenon with its massive columns or the Erechtheum with its famous porch. But in Themistocles' time, these structures didn't exist. In fact, most of the structures you see on the Acropolis today are from the Periclean Age. This of course makes writing about Archaic Athens a bit tricky, but also fun. In some ways I feel like a fantasy author, introducing the reader to a whole new world they've never been to. One of the things I would like to introduce my readers to today is an ancient structure known as the Bluebeard Temple.

This temple was built in the Archaic period (800 BCE to 480 BCE) and was sacred to Athena Polieas, (Protectress of the City). It is refered to as the Bluebeard Temple because of the pedimental three-bodied man-serpant sculpture whose beards were painted a dark blue (other pediments of the temple may also have included snakes, lions and even a Gorgan) . It is not entirely certain exactly where the temple stood; the building was dismantled in the early 5th century BCE. None the less, there is enough evidence to signify that it played a significant part in Athenian religious and civil life.


In my novel, old, aristocratic families are known derisively as "Bluebeards." They resent change and look upon anyone outside of their elite group as upstarts. The "Bluebeards" especially resent younger, richer and more powerful families, namely the Peisistratid, the Alcmaeonid, and the Kiomoneioi. These three families will prove to be both beneficial and detrimental to the people of Athens during the early 5th century BCE, even after the tyranny of the Peisistratid is toppled. Beneficial because they create new laws and freedoms for the average citizens of Attica, detrimental because many in these families consider democracy temporary and no more than a means to an end. It will be up to Themistocles to ensure that Athens' fledgling democracy is not crushed under the boot of a new tyranny. It will prove to be a difficult battle, one Themistocles must win before the mighty Persian empire reaches the gates of the city...

I love it! Bluebeards as aristocrats sounds awesome, and the idea of a purely goddess temple dedicated to Athena in the heart of Athens actually makes a lot of sense. I think your readers will really enjoy this older city-scape you’re introducing them to.