After a long absence I'm back, and as usual I assure you I am still writing about Themistocles and his amazing life. In fact, I'm happy to report that I am currently reading a book that may speed the process along, since it's helping me to better understand the events that took place in Themistocles' lifetime.

The book is called Exile, Ostracism, and Democracy: The Politics of Expulsion in Ancient Greece. In it, author Sara Forsdyke attempts to explain the peculiar institution known as ostracism, which was created to stop the never ending cycle of violence that plagued the polis (city-state) of Athens. For over a hundred years, Archaic Athens was constantly torn apart by civil strife between the warring factions of Athens' nobility. This resulted in either murder or entire families being permanently banished from the city, which led to more murder and exile in retaliation. Even with reforms introduced by Draco (a rather severe lawmaker), Solon (a much nicer lawmaker), and Pisistratus (an affable tyrant), the bickering continued. Finally around 508 BCE, a gentleman named Cleisthenes introduced a set of revolutionary reforms that transferred power from the war-loving nobles to the slightly less war-loving people of Athens. One of these reforms was the power to let the majority decide who should go and who should stay, as opposed to the wealthy minority. This was known as ostracism. 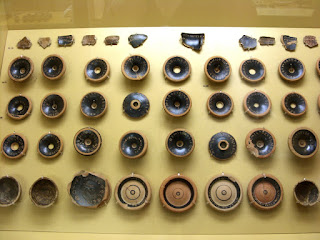 Ostracism comes from the word ostracon, or "potsherd." This is because whenever the people of Athens voted to banish someone from their city, they would cast "ballots" made from broken pieces of pottery with the names of potential candidates scratched on them. If these candidates received at least 6,000 votes against them, they were then asked to leave the city for ten years. After this they could return home and become a citizen again, and in the meantime were allowed to keep their property and any income they accumulated from it.  These generous terms were incentive for the ostracized to return peacefully and leave their grudges behind them.

It was a clever system that broke the cycle of intra-elite conflict in Athens, but unfortunately it was also easily abused. Anyone able to turn a crowd against a particular individual -- whether they were a threat to the polis or not -- could use ostracism to their advantage. In fact, Themistocles is credited with a string of ostracisms between 490-480 BCE.  Among those cast out of Athens during this time were Aristides (one of the generals at the battle of Plataea), Xanthippus (father of Pericles and one of the generals at the battle of Mycale) Megacles (a relative of Cleisthenes) and Hipparchus (a relative of Pisistratus). Ironically, Themistocles would get a taste of his own medicine around 470 BCE, when the people of Athens grew tired of their clever but boastful leader and sent him packing. 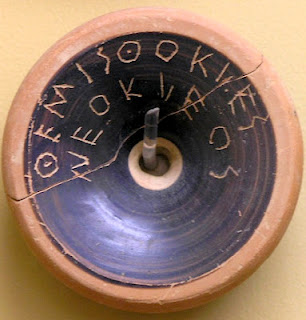 We know the story of Themistocles' ostracism is true, because we have a mountain of physical evidence left behind by the Ancient Athenians to prove it. As you can see from the pictures above and below, archeologists have discovered a myriad of potsherds with the name Themistocles son of Neocles written on them. What's interesting is that many of these ostraca are suspiciously intact, almost as if they were manufactured and then handed out. It wouldn't be surprising to learn that Themistocles had a rather wealthy enemy, one who, perhaps in revenge for once being banished himself, may have ordered up a large number of potsherds to use against Themistocles in the future. It's also possible that Themistocles was suggested for ostracism more than once over the years, which would explain why so many ostraca with his name on it survive. Whatever the case, it's clear that many considered him a danger to the polis. 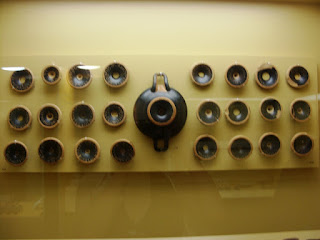 But WHY did they consider him dangerous? He was the hero of Salamis after all, as well as the architect of Athens' powerful (and victorious) navy. Why would the people he saved from an invading Persian army want him banished? According to Herodotus, it was because they were simply tired of Themistocles boasting about his military accomplishments. This is certainly a possibility, but Sara Forsdyke offers up evidence that indicates it may have been more than just a few obnoxious boasts that got him into trouble:


"Themistocles ostracism...is explained by the literary sources as a result of [his] excessive power and honor. At least one voter, furthermore, seems to have been referring to Themistocles' prestige when he wrote on his ballet, 'This potsherd is for Themistocles, of the deme Phrearrhius, on account of his honor.' Another voter, however [wrote] on his ballot, 'Themistocles, son of Neocles, asshole...' Yet another voter accused Themistocles of being a pollution in the land."

The latter quote about Themistocles "being a pollution to the land" is especially interesting. Why would somebody think him a "pollution"? Could it be that he was acting outside of social norms in his private life? Or were people blaming him for some catastrophic event? Say...the destruction of Athens by the Persians?

For me, the latter idea makes a lot of sense. In 480 BCE, Themistocles decreed that the people should abandon the city and head for their ships in order to escape the invading Persian forces. The populace was reluctant to leave their homes undefended, but he reminded them of an oracle which hinted that "wooden walls" would be their salvation against the Persians. He suggested that their newly-formed navy was what the oracle was referring to, and that they could evacuate the city with these ships, as well as confront the Persians with them. Sure enough, the oracle about wooden walls proved to be true. Not only were the people of Athens able to escape the marauding Persians, but a ship battle took place between the Greeks and the Persians in the windy straights of Salamis that summer, with the Athenians and their allies achieving a stunning victory over the larger Persian navy. This victory changed the tide of the war in the Greeks' favor, and allowed the Athenians to safely return home. Alas, when the Athenians sailed back into the port of Piraeus, they were horrified by what they saw. Houses were looted. Temples had been burned to the ground. Public buildings were destroyed. And those left behind had either been killed or captured.  The sweet taste of victory turned bitter in their mouths as the Athenians saw their city reduced to ashes. It was gone. All gone. And so, it may be that they blamed their misfortune on the man who suggested they abandon the city to the Persians: Themistocles, son of Neocles. 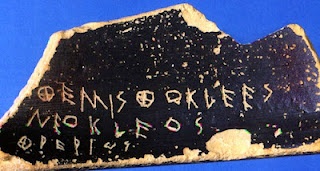 But if that's the case, why would the Athenians wait ten whole years before throwing him out of Athens? The answer isn't clear, but we do know that less than a year after the battle of Salamis Themistocles was already demoted from his position as Generalissimo of the Greeks, because he is conspicuously absent from the decisive Greek victories at the battles of Pleatea and Myclae. Nor is he mentioned as being a part of the founding of the Delian League in 478, a coalition of Greek city-states that was meant to act as a shield against the Persian empire.  The most reasonable explanation for his absence (to me at least) is that perhaps he was ostracized earlier than was initially believed, say closer to 479 or 478 BCE.

Though scholars and history lovers may initially balk at this theory, it certainly makes it easier to explain why Themistocles was not part of several major events in the 470s. Thus I hope you don't mind if I change things around a bit in my Themistocles novel. I think an earlier ostracism will not only make writing my novel a lot easier, but who knows? Perhaps it will make it more interesting, too. ^_^

*Note: Of course I am aware of the various stories about Themistocles that are said to have taken place after the battle of Salamis. We hear of him shaking down allies for money, stalling the Spartans while Athens rebuilt its walls (Sparta was suspicious of Athens' new authority among the Greeks), fortifying the port of Piraeus, attending the Olympic games, and building a small shrine in his own honor. He was certainly busy, but it doesn't really explain why he wasn't a part of several significant events. Thus it seems easier to say these reported activities happened while he was ostracized. And once again, I AM writing historical fiction. So I hope it's OK to move things around!