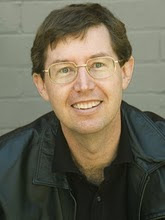 Welcome Gentle Readers to my next author interview. My second victim--er, interviewee, is the talented Mr. Gary Corby!


Like Scott Oden and yours truly, Gary loves Ancient Greece. His novel THE PERICLES COMMISION is due out in October 2010, and I encourage everyone to pre-order it on Amazon or B&N. Now on to the show!


I'm a writer of historical mysteries. But I didn't start that way. I began with a degree in pure mathematics and worked as a software developer for twenty years, the final fourteen at a small software shop called Microsoft. I watched software development change from being a fun cottage industry to a boring big business, just like every other boring big business. So I decided I'd try my hand in a completely different cottage industry: writing novels. Having 6,000 books in the house and a deep love of history probably helped with that decision. I began writing what became The Pericles Commission. In the meantime I won the Sir Arthur Conan Doyle Prize for historical mystery for a short story called THE PASION CONTRACT. Then the book sold to St Martin's Press, and here I am, an author.

2) Tell us a little bit about your novel, THE PERICLES COMMISSION.

THE PERICLES COMMISSION is the first of a series starring Nicolaos, the elder brother of Socrates. Nicolaos walks the mean streets of Ancient Athens, keeping the city safe from enemies both domestic and foreign. It's not only a series of fun murder mysteries, but also an easy introduction to the moment when Athens founded western civilisation. Thus I get to combine three of the things I enjoy most: writing humour, solving puzzles, and ancient history.

3) What fascinates you the most about Ancient Greece? How did you first get interested in the subject?

I've read ancient history for fun since I was a teenager. I'd read Herodotus, Thucydides, Tacitus, Caesar et al. well before I was 18, and I have an excellent memory (he says modestly).

Ancient Greece particularly attracted me because it was such an exciting time. The founding of modern civilization can hardly be anything other than fascinating. At the opening of The Pericles Commission it is 461BC. In that year: The world's first democracy was founded. A sovereign state with one man one vote, free speech for every citizen, written laws and equality before the law, with open courts and trial by jury. Sounds very modern, doesn't it? Drama was being invented. Aeschylus was writing his plays; two young men called Sophocles and Euripides were beginning to write their own. Anaxagoras was developing a theory of matter in which everything is made of infinitesimal particles. It was the beginning of atomic theory! Herodotus was traveling the world, writing his book and in the process founding both history and anthropology. A young kid called Socrates was outside somewhere, playing in the street. And on the island of Kos, a baby called Hippocrates was born to a doctor and his wife. My hero Nicolaos and heroine Diotima begin their career right at the start of the 50 golden years of Athens. If they survive, they'll live to see the founding of western civilization.

4) Your novel has a murder mystery slant to it. Are you interested in that genre?

Oh yes! If I weren't writing historical mysteries I'd be writing SF, the type in which the heroes have to solve some puzzle. Puzzle stories of any sort I love, and I think for most people, wanting to know the solution to a puzzle moves along in the plot.

5) The cover of your novel is great! Who did that and how did you find them?

The series was bought by a major publishing house: St Martin's Press, which is part of Macmillan. My good friends at St Martin's do all the outside bits of the book (the art director is David Rotstein). I'm responsible for the words on the inside. That's how a standard publishing contract works. (Those of you writing a book take note...there's no point thinking about covers because your publisher will handle that.) So weird as this may sound, I don't know who created that cover! I've asked for the name of the artist so I can write him or her a nice thank you note.

6) Speaking of Ancient Greece, who is your favorite historical figure from that period?

There are too many to choose from! Some of them very eccentric characters indeed. I'll mention Callias, who was the richest man in Athens, owned a rent-a-slave business and a silver mine, fought at the Battle of Marathon in the robes of a priest, and was a diplomat par excellence. He was an outspoken democrat. He fell madly in love with the sister of Kimon and married for love, unusual in those days. In an age when girl-children were property, he asked his daughters who they wanted to marry and then bought their husbands of choice with massive dowries. In many ways an amazingly modern man, if you don't count the rent-a-slave business. I use him as a minor character in the first two books.

Favourite movie is the old Jason and the Argonauts with the fighting skeletons done using stop motion photography. It's far better than any recent Hollywood movie. I don't generally play computer games. There's a boardgame called Attika which is interesting. I've always thought it would be fun to create my own boardgame of strategy based on the struggle of the Greek city states. I doubt I'll ever find the time though. Favourite book series must be Mary Renault's tales of Ancient Greece. Highly recommended.

8) Besides Ancient Greece, what time in history do you enjoy reading/writing about?

I read across pretty much every period. I know European history in general fairly well, and particularly military history and the history of science. After Ancient Greece my next best is World War 2.

9) Any future WIP you can talk about?

The first book deals with the beginning of democracy. The second book in the series visits a friend of yours: Themistocles, at the time he's in exile in Magnesia. I called the working title The Magnesia Sanction, but that is guaranteed to change. Apparently it reminds Americans of something I'd never heard of called milk of magnesia, which has to do with bowel movements. As soon as I heard about milk of magnesia I was tempted to go back and write in a glass of milk. The third book I'm writing now. It's set at the Olympics of 460BC, where one of the contestants is going to have an unfortunate experience. I'll note in passing the Olympics of 460 is one of only 14 to have included a donkey race.

10) When can we expect THE PERICLES COMMISSION to come out?

October 12 is the on sale date. As I write, you can pre-order it this minute from Barnes & Noble, Borders and Amazon, with other book stores coming online over the next few weeks. It's a huge kick watching your first book appear!

I'll be at the mystery fan conference Bouchercon in San Francisco in mid-October. Thereafter I'll be touring some bookstores around the US. I'd love to meet all the kind people who've been following my adventures, commenting on my blog or emailing me, so if you can make it do please come along to one of the events. I'll post the events list on my web site as they're booked.
Posted by Meghan at 10:22 AM 4 comments: 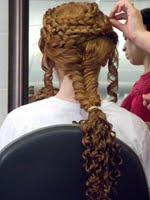 http://www.fairfield.edu/cas/ah_caryatid_photos.html
I've always loved the hairstyles of Ancient Greek women. Complex, feminine and flattering, these elaborate fashion statements have always captured my imagination. It turns out I'm not the only one who loves them!

The Caryatid Hairstyling Project at Fairfield University tested the possibility of replicating the hairstyles and braiding techniques of the marble Caryatids (maidens) from the South Porch of the Erechtheion on the Athenian Acropolis. The project was led by Dr. Katherine Schwab, associate professor of art history at Fairfield University. She chose six lovely students as her test subjects, and the results are pretty fantastic!

For some, fashion and hair may seem a frivolous subject, but to me it's an important part of human history. Many styles start out as a point of necessity and quickly become a characteristic of an entire culture (like kohl eye-liner in Egypt).

If you're interested, then you might also want to purchase the DVD that shows you the entire process of completing the complicated hair of the lovely marble maidens of the Acropolis.

*Next author interview is coming up!
Posted by Meghan at 2:26 PM No comments: