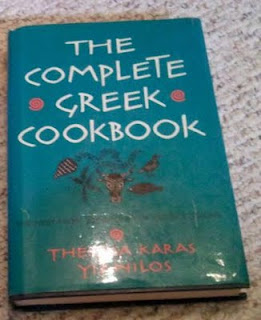 The Complete Greek Cookbook by Theresa Karas Yianilos is one of those charming little cookbooks you can only find these days in used bookstores. Published in MCMLXX according to the front page (1970), The Best From 3000 Years of Greek Cooking is an easy and enjoyable read. The recipes contained within really do cover the span of 3000 years of brilliant Greek cooking, and each recipe is presented with both its history and a surprisingly easy-to-follow list of instructions (though ingredients like camel may be hard to find these days).

Below are a few ancient recipes taken from the book that not only sound delicious, but are full of interesting facts!

The earliest kind of Greek bread was a simple, flat, hard crusted hearth bread, coarse and heavy because the barley flour used in it had a low gluten content. This ancient recipe, described tby Athenaeus in a third century book on cookery is still followed in the Near East.

Mix all ingredients except flour into a 2 quart jar. Place jar in a pan of hot water and let stand in a warm place free of drafts until fermentation begins--aproximately twelve hours or more. Replace hot water every 4 hours. Mix in 2 cups of the flour. Set aside once again in a warm place. Replace hot water in pan. A sponge should be formed in 4 to 6 hours. Put 4 cups flour in a bowl, make a well, and add sponge. Kneed well, lightly dusting your hands with flour until dough is smooth. Shape and put into oiled loaf pan. Cover with damp towel and place in a draft-free place to rise for 4 to 6 hours. It will not rise as high as modern breads. Bake in preheated over at 375 F. for 10 minutes. Reduct to 350 F. 50 minutes.

This recipe comes from Chares of Mytilene, Lesbos, an historian of the 3rd Century.

"Use only the large Asiatic oysters caught in the Indian Ocearn, Black Sea, or the Persian and Arabian gulfs. Use the delicious white meat only. Discard the round white bone sometimes discovered inside theshell--or give it to some Persian. They seem to prefer these bones to gold; they call them 'pearls'."

Drain liquid from jar. Roll in flour. Heat it until hot in a large frying pan. Fry oysters on medium-high heat for 5 minutes turning over once. Sprinkle with seasonings and serve.

Thousand of years ago, the respected Greek poet and gourmet, Archestratus wrote "Forget all other dessert, there is only one: the Athenian cheese cake with Attica honey from Hymettus."

In a large bowl, beat egg whites until stiff (with a sprinkle of salt). In a blender blend yolks, honey, lemon juice, rind, floud and cheese for a few seconds. Fold batter into egg whites using spatula. Fold in sour cream. In a separate bowl mix crumbs and nuts together. Grease the bottom and sides of a large cake pan or spring-form cake pan. Spread crumbs over bottom and sides. Pour mixture in cake pan and bake at 325 F. for 45 minutes. Chill in cake pan 6 hours before cutting and serving.

This is a prescirption concoted by the great physician Hippocrates who lived in the fifth century BC. He even invented a bag in which to filter his wine!

Mix all ingredients and heat slowly over low heat. Strain into decanter or cup.

In ancient Greece camel was served to royalty. Aristophanes mentions camel meat in his writings, and Aristotle praises it as being tasty.

Mix marinade ina bowl. Marinade camel for four hours turning meat over if skewered.
Spoon sauce over meat if left whole. Bake for 2 to 3 hours at 325 F. or allow 30 minutes per pound.


The Complete Greek Cookbook contains 300 delicious recipes that with time and patience can be mastered by anyone. It's a great introduction to Greek cooking and full of awesome historical facts that will not only appease your inner chef, but your inner historican as well. :)
Posted by Meghan at 7:46 PM 5 comments: