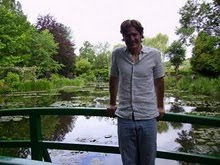 My next interview is with Mark Noce, whom I met at the San Francisco Writer's Conference this past February. We were both standing in line waiting to see agents when we struck up a conversation about....history! Mark is a big Civil War fan and has finished his first novel The Long Defeat. I was lucky enough to get a sneak peak at it and I have to say it's amazingly written. That's why I decided he would be the next person to be interviewed for my blog.

Please be sure to visit Mark's blog and take a look at his writing. It's fantastic!

I’m Mark Noce. I work as a Technical Writer at Google by day and as a novelist by night. I write mostly historical fiction, although I do write in other genres for fun, and I currently have several literary agents interested in a novel I’ve written set during the American Civil War entitled The Long Defeat. To learn more, checkout my blog here.

2) Tell us about your book THE LONG DEFEAT.

At the height of the American Civil War, the destinies of two men are set on a collision course when they and their comrades meet under a flag of truce, only to later find themselves facing one another again on opposing sides of the battlefield. The Long Defeat chronicles the personal stories of a Northern soldier, William S. Book, and a Southern Confederate, Nathaniel Saxon. William S. Book of Boston embodies the Northern man of industry and progressiveness; Nathaniel Saxon of New Orleans represents the Southern soldier of culture and tradition. The novel revolves around these two diametrically opposed protagonists and several of their fellow comrades-in-arms who convey their thoughts and fears in letters written to mothers, wives, and other women back home. Each chapter is written in a third-person objective style and concludes with a letter written by one of the primary characters in the novel. Written from epistolary perspectives, these men describe hard marches, severe hunger, brutal battles, even more brutal hospitals, prisoner exchanges, and even death. In addition to this novel being a historical fiction, I have also gone to great lengths to ensure the authenticity and historical accuracy of the campaigns and armies portrayed in The Long Defeat. For those of you who haven’t had a chance yet to read an excerpt of my book, just give me a ping and I’ll email you a copy.

3) How did you come up with the title of your book?

Oddly enough, my title has a The Lord of the Rings origin. I’ve always liked Tolkien’s concept of “the long defeat” whereby even those supposedly victorious in a struggle still end up ultimately defeated by the destructiveness of war and conflict. In the end, I really like the title because it gives a sense of how in war, in a civil war in particular, both sides are defeated. I also found numerous references throughout Civil War regimental journals of soldiers who spoke vividly on this recurring theme of defeat even in the midst of victory.

4) What is it about the Civil War that fascinates you?

I’ve been a big civil war buff since childhood. As the saying goes, when the civil war bug bites you at that young an age…its terminal. I’ve been to the battlefields, watched movies, and read books on the subject for as long as I can remember. I think what really hooked me was how personal the Civil War comes across even after almost 150 years. People went to war with their brothers, cousins, friends, and neighbors together, in the same regiments. In the border states, sometimes against their own family and neighbors. It was before the mechanized age, before planes and nukes, so the men had to face each other down rifle barrels paced only a few hundred yards apart. You saw the man shooting at you and the man you tried to shoot back. Well, sometimes anyway. Even the causes for the war were very personal. You went because your own farms and fields would soon be invaded by opposing armies, because your livelihood did or didn’t depend upon slaves, because you didn’t want others to call you a coward. It was a very emotional conflict and I think that still resonates in American society to this day.

5) Have you visited any of the places that appear in your book?

Just about all of them. I’ve spent time in Boston, New Orleans, Washington D.C., and battlefields across Virginia, Maryland, and Pennsylvania. I like to revisit places in different season too, in order to get a different feel for a place. My first trip to Gettysburg as a kid is probably one of my most memorable, and many of the places I visited then eventually featured in my novel years later.

6) Who is your favorite historical figure during this period?

My interest is usually in the unsung, social history of every day people. My main character, William S. Book, is actually inspired by the real life story of a Massachusetts man named Benjamin F. Cook, from Gloucester who served with the 12th Massachusetts and later wrote a regimental history describing his experiences. But I suppose if I had to pick someone famous from the era, I’d say probably generals like Grant and Chamberlain from the North and Lee and Jackson from the South, simply because their actions and decisions had such widespread effects upon not only the men at the front, but people’s perception of the war back home.

7) What is your favorite Civil War book/movie/game?

Best civil war book is tough, for me it’s a three-way tie between The Red Badge of Courage, Gods and Generals, and of course, The Killer Angels. For movies, I certainly like Gettysburg, Glory, and Cold Mountain. As far as games go, I’m not sure, but I am an active civil war reenactor, so if living history counts as a game, then reenacting is where it’s at.

8) What other moments in history are you interested in writing about?

9) Any WIPs you can tell us about?

I’m blogging chapters about an online Sci Fi story for fun right now. With regards to historical fiction, however, I’m looking into more American topics at the moment, probably either frontier life in the 1700s or maybe even more maritime activities set earlier. It just depends where my imagination takes me!

10) Anything you'd like to mention to all the readers out there?

If you’d like to learn more or would like to share your own writing/reading endeavors with me just give me a ping. I always like to meet new people and hear their thoughts. You can usually find me at my blog here. I like to include input from my followers into my writing and also sometimes conduct fun contests online too. Just drop on by. Thanks for reading!
Posted by Meghan at 12:53 PM 3 comments:

Did the Greeks just lose their freedom again?

I was thinking about returning to Greece this year, but it looks like that's not going to happen. Greece is a real mess. And it just got worse:


Does Greece Have a Tea Party?


I hope no violence erupts from this, and I also hope that Greece cleans up its act quickly so the people can get back what is rightfully theirs. For them to lose part of their sovereignty is sad. After all, Greece is the country that inspired us to believe in sovereignty in the first place.
Posted by Meghan at 2:44 PM 1 comment: