OK, so I'm a month late on wishing everyone a great 2012. Sorry about that! >_<; But I've been stuck while writing my novel again, and there hasn't been much to update on that front. However, an idea hit me not too long ago that might actually get me writing again. You see, I've been struggling to clearly define how Themistocles fits into the birth of democracy in Athens (yes, that's democracy with a small d). The explanation is of course that he knows its founder, Cleisthenes. Now, for some reason I imagine Cleisthenes as a bit crazy in my story. Why? Because it strikes me as odd that someone from a noble family who COULD have been tyrant if he really wanted to decided to give power to the people instead. 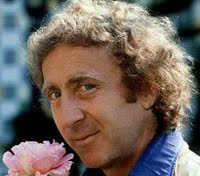 To be fair, perhaps Cleisthenes did it because he was just a really cool guy, but the idea of him being an insane genius a la Gene Wilder in Willy Wonka & The Chocolate Factory is much more interesting and adds a sense of drama. Why is he helping the lower classes? What does he really want? And do the ends justify the means? These are all questions Themistocles will have to ask himself as the story progresses and he finds himself unable to completely trust his mentor and ally. (His confrontation with Cleisthenes will ultimately shape how he fights the Persians later on.)

At any rate, if there's still anyone left reading this blog, thank you for your patience. This novel needs to be written (more people must know about Themistocles). I just hope I'm up to the task!
Posted by Meghan at 11:25 AM 1 comment: