Since I already did a list of ten video games based on Ancient Greece a few weeks ago, I thought it would be fun to follow up with a list of movies as well. Enjoy!

Starring Steeve Reeves, The Giant of Marathon is supposed to be based on the famous messenger Pheidippides/Philippides, who ran 26 miles from Marathon to Athens to announce the Greek victory over the Persians. I say supposed to, because there is NOTHING realistic about this movie. It mostly revolves around Pheidippides' love life; the Persian invasion is an after-thought. This movie is so bad it will make you want to face palm yourself. If you want a good laugh though, I recommend checking out the MST3000 commentary track for the movie on Hulu. Before Zack Snyder's 300 there was The 300 Spartans (AKA Lion of Sparta), starring Richard Egan, David Farrar and Ralph Richardson. I have to admit that I own the movie but rarely watch it since it's so dated and the script is cheesy at best. I will say that it IS far more accurate than 300, but that's not saying a whole lot. Still, it has its moments and is a good one to rent. 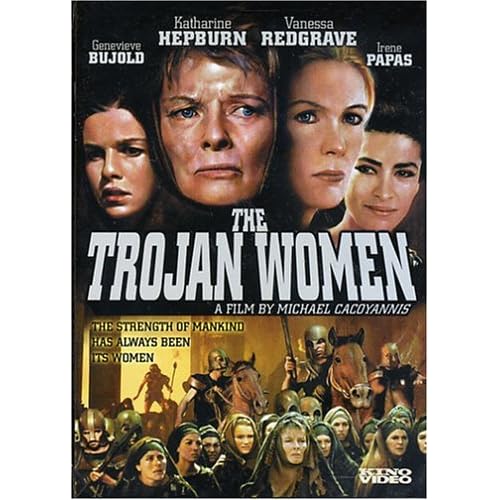 If you're familiar with the play then you know that The Trojan Women isn't exactly an upbeat story. The movie stars Katharine Hepburn and Vanessa Redgrave among others, and while it's pretty slow it also has its moments where you're engrossed in the acting. I especially like the back and forth between Vanessa and Katherine--there's a lot of tension and emotion. Another good one to rent.

This is still my favorite movie about Ancient Greece. It's got everything: dated claymation, Sir Laurence Olivier as Zeus, Maggie Smith as Thetis, and the sexy Harry Hamlin as Perseus. There's adventure and love and comedy in this movie. I admit the scenes with Medusa near the end scared me as a little girl, but for the most part this is something you can watch and enjoy with the whole family. So don't just rent it---OWN it! I LOVE this movie. It's so cute and uplifting! I love how Hercules starts off as an akward teenager in the beginning and turns into a true hero by the end. Of course the movie is made brilliant by the acting of James Woods as the smarmy Hades, Danny DeVito as the hard-nosed Satyr, Susan Egan as the cocky Megara, Paul Shaffer as the hip Hermes, and Bobcat Goldthwait as the dull-witted Pain. Not everything is accurate in terms of Greek Mythology (Hera is a loving mother to Hercules!?) but there's enough references to his 12 labors and a warm happy ending (also not exactly accurate) to make up for any faults. Ugh. This movie is NOT good. The acting is bad, the script is lame and parts of it are confusing at best. Still, I DID enjoy the climactic battle between Greece and Persia, (and Raz Degan is HOT as King Darius, am I right?) I admit there aren't enough movies about Ancient Greece so I should be happy with anything that comes out about it, but here's to hoping a better version of Alexander will be released in the future.

I'm not going to lie: Brad Pitt is about the LAST person I'd imagine to play the legendary hero Achilles. I wince a bit whenever he's on screen. Luckily there's a huge cast of great actors to make up for that. First and foremost is Peter O'Tool as Priam. He pretty much out-acts EVERYONE in this movie. You can feel Priam's denial as the Greeks are outside his walls. You can feel his pain as he is forced to watch his son's body be dragged behind the chariot of Achilles. You sympathize when he goes to beg for his son's body. And then there's Brian Cox as the ambitious and ever-scheming Agamemnon, and Brendan Gleeson as the jilted Menelaus. And of course the talented Eric Bana is always pleasing to the eye. This movie isn't exactly accurate in terms of story, but I was impressed with the research they did for the sets and costumes.

This silly, over-the-top and highly entertaining movie is based on a silly, over-the-top and highly entertaining comic book by Frank Miller. 300 is named of course for the 300 Spartans who famously defended the pass at Thermopylae against the Persian invaders. I enjoy this movie not for its authenticity (there's virtually NONE) but for its special effects and silly one liners (THIS. IS. SPARTAAAAA!) If you're looking for a movie that will educate you on the battle of Thermopylae look elsewhere. If you want to be endlessly entertained however, this is the movie for you.


I actually listened to part of this as an audio book and I like the fusion of Greek Mythology and a gritty 21st century setting. I also like the main character Percy Jackson, who has a big heart and an old soul. I never read or watched anything Harry Potter, but I get the feeling I'll end up seeing this movie for both the interesting plot (Percy is the son of Poseidon charged with getting back Zeus' stolen lightning) and the awsome special effects. Is it me, or is Sam Worthington and his crew cut out of place in this movie? And where is Bobo? I'm not sure how I feel about the special effects in this (they look very expensive though) but I'll guess I'll have to see this to find out. Will it be as good as its 1981 predecessor? I'm going to say no, but here's to hoping...
Posted by Meghan at 12:18 PM 6 comments: